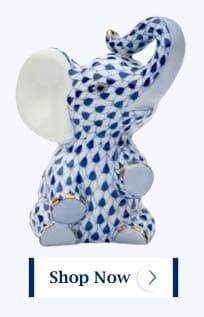 Herend's Viennese Rose décor is of the same age as the Herend Porcelain Manufactory. Thanks to the popularity of the stylised rose pattern, its variations were employed by several manufactories throughout the 19th century. The origins of the Herend design are rooted in the Biedermeier period.

Its green banded version with a central rose motif was commissioned by the Viennese Court.

The recently revamped design of the Viennese Rose now merges several of its variations. The scattered rosebuds, the enlarged central or the speckled smaller rose blossoms triumph in their own right on individual items. Placed next to each other, however, the very same elements form a harmonious whole, commemorating the ambiance of their ancestry.

The refreshed pastel hues further emphasise the coherence of the distinct motifs.

The symbolism of the rose pattern has not lost any of its symbolism and its revival embodies the perpetuation of our cultural heritage.